About Solar Panel Manufacturers in Indonesia Developed and Promising

Solar Panel Manufacturers in Indonesia are very developed and promising, taking advantage of the tropical climate in Indonesia, which gets a lot of sunlight, which can be directly converted into electrical energy. In the future, solar panels will become a promising alternative energy producer with many benefits and are environmentally friendly

What is a Solar Panel? -A Solar Panel is a device that utilizes solar energy to generate heat or electricity. Based on these two goals, we can distinguish between solar collectors, which produce hot water (generally for domestic use) using solar thermal energy, and photovoltaic panels, which generate electricity from solar radiation falling on the panel photovoltaic cells.

In the solar collector or collector there is a liquid that absorbs solar radiation in the form of heat, this fluid then enters the heat storage compartment. The panel consists of a receiving plate and a channel through which the liquid circulates.

The hot liquid is passed to a heat exchanger, where it releases its heat, heating water for further household use. When leaving the heat exchanger, the liquid cools and is recirculated back to the solar collector.
Photovoltaic Solar Panels are made up of many cells, called photovoltaic cells, which convert solar radiation into electricity. Electricity is generated due to the ‘photovoltaic effect’ caused by solar energy (photons), producing positive and negative charges in the two nearby semiconductors of various types, which produce an electric field that will generate an electric current.

The materials most commonly used to make these cells are gallium arsenide (GaAs), which is used in other complex electronic devices, and silicon (Si), which is cheaper and is also used in the microelectronics industry.
Silicone cells are the most common and the most widely used. The photovoltaic cell’s performance depends on the internal three-dimensional structure of this silicon sheet. According to this structure, we can classify them as follows: 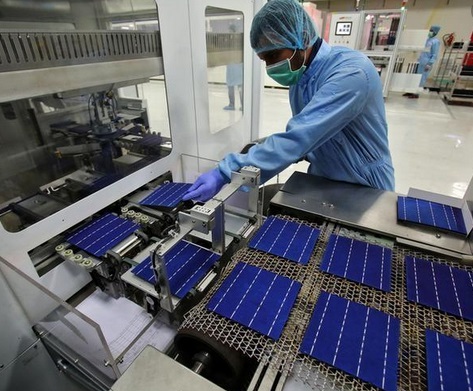 Monocrystalline silicon cell: consists of one large crystal which is cut into thin sheets, generally a uniform blue color. They are the most advanced, have higher manufacturing costs and provide superior performance under certain conditions.

Polycrystalline silicon cells: consisting of several crystals, have a non-uniform blue color, although recent manufacturing techniques have provided greater uniformity to the appearance of the cells.
Solar Panel Amorphous silicon cells: do not consist of crystals. These are the cheapest but also the ones that offer the lowest yields, they are used, for example, in devices such as calculators or watches and have the peculiarity that they can generate electricity (in small amounts) even if they are not directly exposed to solar radiation in a perpendicular manner.